‘There is nothing outside the text’ Derrida

Kingsland Road Studio proudly presents the first exhibition, Presence – Absence. Set in the basement of a discreet terraced building, light pours upon the crowd through the glass brick ceiling. The space, poignantly, holds a sense of vacancy and yet is full with natural light. The exhibition includes works by up and coming artists Zachary Eastwood Bloom, James Irwin, Brendan Olley and Alida Sayer, who have explored ‘aspects of society that are lived with everyday, yet are intangible, forgotten or ignored.’

As a whole the exhibition had good pace and a thread of intrigue which ran through the collection, despite that different approaches were taken to ‘investigating preoccupations with technology, communication, memory and perception.’ Notably, Alida Sayer’s work stood out as it really embodied, rather than merely evoked, the tension between permanence and intangibility. Her dynamic typographic works demonstrated a sense of delicacy in time, fragility and relevance. She provides a visual representation of individual encounters with states of reality. Her pieces have a sense of permanence; delicate yet bold stacks of complex sheeting are sliced and seemingly placed in bulk and stunning exactitude. They connote a tone of eerie precision, obsession and physicality. We feel we are viewing the hands of the author on the pages, their physical presence is mirrored on a table reflecting the object whilst the text, which explores narratives of trauma, stains the pages with its repetition.

However, despite their apparent precision her creations are actually very organic. When asked about her technique she willing replied that it is actually very spontaneous, she follows her own hand, her subjective eye scans for shapes and folds where the text’s presence is best received. In contrast to the solidity of the pieces, the text, and its abstracted meanings connote a delicate absence. Meaning is always absent and in need of reconstruction through contact, reading or interpretation with the physical. This tension between the presence of the object and the absence of the meaning is in a constant state of play with Sayer’s work. The meanings are very much made present to the viewer through their distorted physical absence; without the presence of the text there is no interpretation. 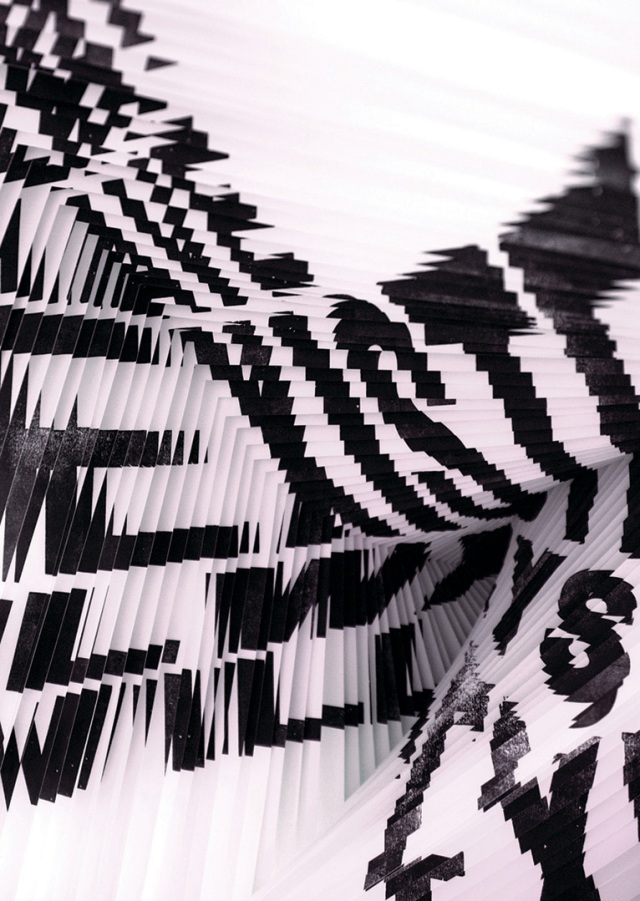 Sayer also showed her first large-scale work – ‘a pulsating, freestanding piece comprised of large format sheets of acetate, with letterforms exploding from the multiple layers, trapped within the piece and moving in and out of visibility.’ Almost transcendental in its engulfing presence, this piece holds the viewer in suspension, between binaries, open space and trapped text.

The real triumph of this exhibition, and Sayer’s work in particular, is the manipulation of text as a symbol for both presence and absence, culminating in both the physicality of art and inescapable absence of tangible meaning. Sadly, and perhaps ironically, the exhibition is now itself lost in absence. The show closed on the 13th June. Presence/Absence’s triumph lay in the experiential interaction with the works in order to truly decipher the notion of presence and absence. And so, as if dissolved in a ray of sunlight only the imprint of this exhibition now exists. The residue left behind is the notion that one can experience the meaning of absence only through the physical presence of the objects that hold it.

This entry was posted in Uncategorized. Bookmark the permalink.